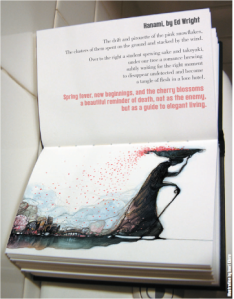 Art is not found only in the painter’s studio or in the halls of a museum, it also has its place in the store, the shop, the factory and the home. In fact, when art is reserved as the province of professional artists, a dangerous gulf develops between the fine arts and the everyday arts. The fine arts are elevated and set apart from life, becoming too precious and therefore irrelevant. Having banished art to the museum, we fail to give it a place in ordinary life. One of the most effective forms of repression is to give a thing excessive honour — Thomas Moore, ‘The Sacred Arts of Life’

I want to repeat the last of these sentences by Thomas Moore because it interests me: “One of the most effective forms of repression is to give a thing excessive honour”. And also because it confronts me. There exists in my mind—and likely the minds of others who’ve cared to dwell on such things—a contest between art, or more specific to this conversation, poetry, as something special, something heightened, something that holds within it a promise of the sublime, and poetry as something quotidian, ordinary, an essential part of our everyday culture: a way of communicating and recording things that matter to us. Nowhere is this distinction more conspicuous, perhaps, than when poetry is made manifest in print. As for me, I am in love with the letterpress, with creamy linen paper, with section-sewn books printed in fonts shaped by a fifteen-century monk who knew that ascenders and serifs could make the human heart, properly attuned, swoon. I am taken with books that carry within them some sign that a human hand was involved. Like many, I mourn the disappearance of the hand in the objects of our everyday. The pleasure that comes from touching and reading a fine, hand-made book is akin to that of preparing and eating a gourmet meal. Poets have long felt that words—or at least the right words in the right order—deserve more than a stack of cheap paper in a stapled cover.

But I’m also a believer in the idea that poems shouldn’t only be available in expensive and hard-to-get-hold-of book format. More than thirty years after the fact, I am persuaded by the premise underpinning David Malouf’s Paperback Poets proposal to University of Queensland Press: poetry books, he argued, should not be unnecessarily luxurious; they should be affordable and readily available. When Malouf offered his first collection—Bicycle and Other Poems—to UQP, it came with the stipulation that the book not be released in hardback and that it sell for no more than a dollar. To his surprise, UQP agreed to his terms. And why not? It was a terrific and timely idea. It helped make poetry accessible to young people in the sixties and seventies, who wanted to read the poems of their peers, and print runs for these books ran in the thousands.

Since those days, we’ve witnessed the burgeoning of poetry in cyberspace. This is, arguably, a more democratic space than ever before imagined, and readership—or “traffic” as we’ve now come to call readers—is measured not in print runs but page hits, which for some sites count in the tens of thousands (or more) every month (just think of John Tranter’s Jacket). In the classless world of cyberspace, there is no such thing as an original: digital files can be replicated relentlessly and flicked around the world without any threat to the quality of reproduction. What we lose in aesthetics—tangibility, the mark of the human hand—we make up for in accessibility, convenience and speed. While books may go out of print after only a couple of years, cyberspace evolves at a dizzy rate (Darwin on speed) and websites are deleted at the whim of webmasters and content rewritten, replaced, deleted overnight. Already, libraries, cognizant that much of popular culture documentation now exists only on the net with no print counterpart—and is therefore at risk of being lost forever—have set about archiving websites as fast as their staff and budgets can manage. In all likelihood, and not too far into the future, archival libraries, such as the Fryer at the University of Queensland, will be stacked not with pencilled and coffee-stained manuscripts, but with memory sticks and computer hard drives, complete with an author’s web surfing patterns (which may or may not include porn sites), their search histories, and e-mail correspondence.

But the solution to this contest is not a pitting of the extraordinary against the ordinary. Neither is it some kind of happy medium—some sort of in-between space where the strength of each position is retained but only at the sacrifice of flavour and quirk. Of course there’s a lot to be said for pragmatism, but I think a better answer lies in stretching the space of the extraordinary so that it ropes in the ordinary. I want to see poetry in museums—I’m thinking of Gilgamesh on cuneiform tablets and illuminated books in glass cases—in libraries and university classrooms. I want to read poetry typeset in hardcover books, but I also want to find it on websites in san-serif fonts, on buses, on television, radio, in shops, airports, and cinema toilets.

We now occupy a space that is infiltrated by global multimedia to a point where our mental environment is one of the last stands of private space. People need poetry to help them resist the onslaught. People need poetry, as the Russian poet Andrei Voznesensky says, to stop us becoming robots. “Poems let us enter a private space in which time slows down and possibilities expand. In that space, we’re allowed to be tentative, instead of being asked to sign on the line, answer the phone or pick up a weapon”, as David Orr says. Poetry’s greatest task, I think, is to foster a necessary privacy in which the imagination can flourish. And here, I’d like to spin on the word “privacy” to introduce the toilet cubicle into the conversation.

Like the mind, the toilet cubicle can serve as a sanctuary from the encroachments of the modern world. It is presumed, for instance, to be a camera-free zone. Toilets are a place to do something in private. But toilets are not always used for conventional purposes. Toilets can also function as displaced versions of the spy’s secret rooms. American anthropologist Alan Dundes, in his essay “Here I Sit—A Study of American Latrinalia” (a coinage referring to markings including art, drawings and poetry made by humans on bathroom walls—a joke on the internet said Dundes prefers this coinage to “shithouse poetry”, which I will let stand as the one and only instance of bathroom punning to be heard in this discussion), saw the public bathroom (which houses the toilet cubicle) as a bastion of taboo-breaking expression. There is a sense, albeit coded, that the toilet cubicle is a site for the return of the repressed (or at least the suppressed): people enter a bathroom and buried truths emerge.

But what happens when a poem enters a toilet cubicle? What does this context add to the reading of the poem? These are things that interest me. I imagine, for one, that there might be surprise on behalf of the sitting reader, and possibly bemusement. Hopefully amusement. There would be less pressure on the poem for it to be understood, I would think, as most people would need to be on their way soon enough. People owho don’t like poetry tend to fear nonsense, but this context, I think, might lend a necessary levity to language. I would also like to think that in the private space of the toilet cubicle, the reader in his or her semi-nakedness might hear something real—something more than just information, something real about life and about dreams.

When we are in the poetic space we could be anywhere, out in nature, in someone else’s house or at work, in an airport or cinema toilet, and still we can feel at home. All that is required is to truly inhabit the space. The word inhabit comes from a root that means to give and to receive. We inhabit a place when we give something to it and when we open ourselves to receive what it has to offer. Some places don’t seem to have much to give, or what they have is not something we’re inclined to receive, and so it may be difficult to inhabit them. But this project—which gives space to poetry so that poetry might give us space—goes some way toward rectifying this. The poems that will soon dignify the toilet doors of airports and cinemas across the country do all the things poems should do. They please as they do as they please. They deliver what we hadn’t thought to ask for. They confront and confound and inspire. They announce and protect the private territory of self, exercise parts of the mind and memory petering out for want of use. They are humble, unpretentious, make no claims beyond themselves. For their ordinariness I am inclined to praise them. But not too much. Each poem makes a little space in the imagination from which we might love the world— splendour, foibles, all—a little bit more. Or at least we might look at it, ourselves, our lives, a little more attentively.

On April 1st 2006, a live event was held at Customs House, Circular Quay, featuring the six poets reading their poems and a cubicled reading space built for the occasion. The event also featured the inaugural Mineslec, Red Room’s annual mini-essay-lecture to be commissioned annually from a poet and delivered to a live audience. Poet and critic Bronwyn Lea presented her thoughts on the topic of poetry and space. The live recording of the poets was broadcast by the Community Radio Satellite in May 2006, and the poem posters were displayed at the following venues: Qantas domestic terminals – Sydney, Melbourne, Brisbane and Perth; Greater Union and Village cinemas – Melbourne, Sydney, Brisbane, Gold Coast & Sunshine Coast, Perth and Adelaide.

2 thoughts on “Behind the toilet door: poetry and space”