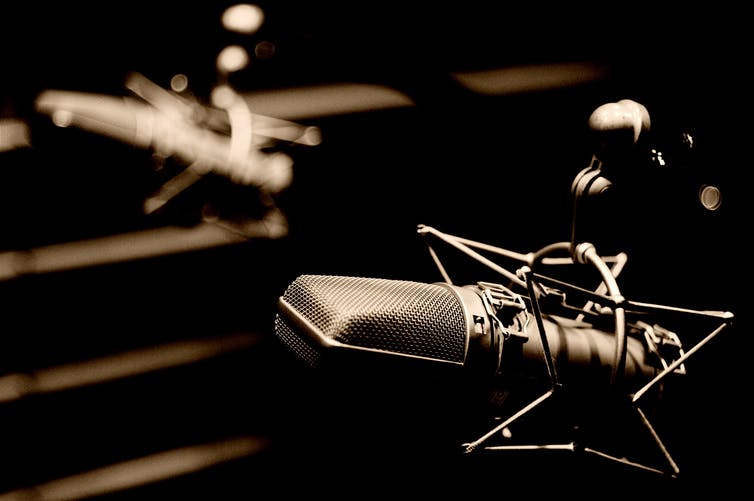 Australia’s long-running literary flagship program – Poetica on Radio National (RN) – is slated for axing in 2015. It’s one more casualty of the cuts to the ABC budget, announced last week.

For the first time since 1946, ABC Radio will be without a dedicated poetry program.

Barry Hill, a poet and radio critic for The Age from 1978 to 1990, placed the blame not with the Government but squarely on the broadcaster’s shoulders: “Shamelessly,” he wrote in The Age, “the Australian Broadcasting Corporation beheaded poetry”.

Hill points beyond the budget to what he sees as the “mega culprits”. These include the ABC’s “managerial corporate ethos” and its “insipid grasp of what might be called a critical culture”.

Even if true, it hasn’t always been the case.

Poetry has had a safe home on radio since the ABC’s inception on July 1 1932 – as Mike Ladd details in his 75th anniversary of ABC Radio – when the bells of Sydney’s General Post Office first were broadcast to the nation.

Prime Minister Joseph Lyons issued the station with a charter to “provide information and entertainment, culture and gaiety” while serving “all sections and to satisfy the diversified tastes of the public”.

Early on, as Ladd recounts, poetry appeared on ABC radio in the form of (usually Shakespearean) dramas. Douglas Stewart was the first Australian author to have his verse dramas broadcast – beginning with The Fire on the Snow in 1941 and Ned Kelly in 1942 – followed by Colin Thiele, Rosemary Dobson and others.

In 1946 John Thompson – poet, editor and moreover the father of actor Jack Thompson – founded Australia’s first weekly program dedicated to poetry. Quality Street ran for an impressive 27 years before being replaced by Sunday Night Radio 2 in 1973.

Founded by Richard Connelly, Julie Anne Ford, and Rodney Wetherell, Sunday Night Radio 2 ran regular, full-length features on poetry, as did its 1981 successor, Radio Helicon, whose executive producer was at one time the poet John Tranter.

Another long-running program, The Poet’s Tongue, appeared in 1957 and ran until 1986. In the early days the producers drew on actors, Judy Davis among them, to perform the poems. Soon the program employed the more contemporary idea of featuring the poets themselves to read and discuss their work.

In 1986 the Poet’s Tongue was replaced by Richard Buckham’s The Poetry Feature, a 30-minute segment slotted into the Sunday Fictions, which ran until 1994. After a brief poetry-free stint following the axing of Sunday Fictions, a program called Box Seat ran for a couple of years before morphing into Poetica in 1997.

Produced by Mike Ladd, Poetica draws on live readings, studio-based poetry features and on-location recordings. It is admired in the English-speaking world for the way it presents poetry, embedded in rich soundscapes, carefully crafted to enhance comprehension and heighten the listener’s experience of the poem.

Not only has Poetica brought poetry to a broad audience, it has also amassed a free online archive from which past programs can be downloaded by researchers and the general public. And not to be overstated, it has provided much-needed exposure for poetry publishers and a source of income for poets in the form of copyright fees.

A freelance radio producer, Prithvi Varatharajan, described the axing of Poetica to me as “a huge loss to Australian audiences”. He elaborates:

George Orwell, in his essay Poetry and the Microphone, spoke about the ‘possibilities of the radio as a means of popularising poetry’. Poetica was doing just this in Australia, and the overwhelming majority of online feedback shows just how appreciative audiences have been of the program. We can only hope that there is some room for poetry on the ABC in the future, after Poetica is gone.

It has been suggested that RN will replace Poetica – along with its axed cousins, Bush Telegraph, Into the Music, Hindsight and 360 Documentaries – with a multi-purpose, weekday feature-slot that will run commissioned 28-minute radio documentaries from freelance producers.

Certainly a new program offers consolation, but in its contraction of scope and expertise the successor looks to be far from commensurate with the cultural gift that was Poetica.

This article is republished from The Conversation under a Creative Commons license. Read the original article.