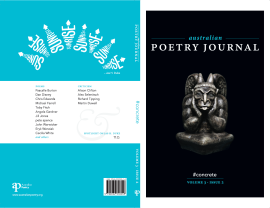 In everyday scale, a letter of the alphabet is usually no bigger than a freckle or an iris, and a word is not much wider than a thumbnail. The tiny components of written language are rendered almost invisible to us in our race to extract all-important ‘meaning’. But in concrete poetry, language stands in our way: letters and words fight – through scale or arrangement – for visibility. As Roberto Simanowski puts it: ‘concrete poetry deals with the relation between the visible form and the intellectual substance of words’. It is visual, he says, because it ‘adds the optical gesture of the word to its semantic meaning’. As a consequence, concrete poems ask readers to look simultaneously ‘at’ and ‘through’ language.

Some poems make a performance of typography. John Warwicker’s design for ‘In the Belly of Saint Paul’ – replete with stylish ornaments, discretionary ligatures and mimetic kerning – would seem to validate psychologist Kevin Larson’s 2006 finding that an aesthetic typeface can elevate our mood (it can also increase creativity and cognitive focus for a period after viewing). Jordanian calligraphic artist Ibrahim Abu Touq depicts a poem by 12th century Sufi mystic Ibn Arabi; while the late Cornelis Vleeskens (whose work has rarely appeared in editions greater than a handful) appears to reference Japanese calligraphy, though the spill of Roman letters doesn’t quite add up to a word. Extracted from his series of concrete anagrams, Christian Bök’s ‘Odalisque 02’ employs the 21 components of letterforms – serifs, spurs, ascenders and so on – as brushstrokes to evoke the female figure within a fractured alphabet; while Ken Kempson’s ‘Saint Poet Quoted’ uses the single inverted-comma to illustrate a field of infinite quotation.

Chris Edwards, Toby Fitch and Pascalle Burton reveal that quotation is frequently the stuff of concrete poems. Edwards’s After Naptime, an extract from a 12-scene ante-narrative about a trip to a haunted lighthouse, retains traces of Dickens’s David Copperfield and Bleak House and Dennis Cooper’s ‘The Anal-Retentive Line Editor’ and snips images from Ward, Lock & Co.’s Great Inventors and Lawrence Lessing’s DNA: At the Core of Life Itself. Fitch’s ‘Missing Scène(s)’ presents as a redacted poem but is, the author says, a mistranslated inversion of Rimbaud’s ‘Scènes’. In contrast, Burton’s poème trouvé makes no mystery of its source: the physical object of H.G. Wells’s The First Men in the Moon.

Not surprisingly several of the poets here are also practitioners in the visual and plastic arts. The original artwork for Angela Gardner’s ‘A Quiet Voice’ is a watercolour on Chinese concertina-folded paper, and Nancy Campbell’s ‘How to Say I Love You in Greenlandic’ is made from hand-printed pochoir and letterpress. Campbell’s full sequence comprises 12 words: one for each letter of the Greenlandic alphabet, although here we present only six. (In case you are wondering, ‘asavakkit’ is how Greenlanders declare their love.) Visual poems by pete spence and Eryk Wenziak explore a zone of indeterminacy but retain an affiliation with language that prevents their work from stepping over into objects. Elsewhere Cecilia White and John Selenitsch eschew ink and paper to sculpt poems out of marble, wood and Perspex for the gallery floor.

In criticism, π.o. shines the spotlight on legendary performance-poet Jas H. Duke – a big-boned fan of rounded sound, who reportedly once ate a page of Yeats while reciting a poem, and whom π.o. says is Australia’s only Dadaist poet of any note. Alison Clifton looks at recent poetry collections to flirt with text and image: Marionette: A Biography of Miss Marion Davies, Jessica Wilkinson’s biography of silver-screen siren Marion Davies, and Fitch’s Rawshock, accompanied by homonymic Rorschach inkblots. Selenitsch gives a fascinating run-down of the development of concrete poetry from an Antipodean perspective and identifies Alan Riddell – Townsville-born poet and editor of the classic anthology Typewriter Art – as a precursor to the art form in Australia. To accompany his essay we offer a selection of classic Australian concrete poems, courtesy of the 2013 Born to Concrete exhibition (which inspired this special issue) curated by the Heide Museum of Modern Art and University of Queensland Art Museum. In ‘Heartheart’ poet and installation artist Richard Tipping contributes an essay that chronicles his 40-year fascination with circle poems and poem squares, while Martin Duwell rounds out the issue with a look at Clive James’s new translation of Dante, paying his respects to the Inferno’s resplendent architecture and dramatic portraits and noting that the sign above the Gates of Hell has been changed.