Seen through one window, Paul Hetherington’s Six Different Windows appears to be a collection of poems concerned with the death of art. Such a theme is perhaps not surprising given that Hetherington, in addition to his seven books of poems, edited three volumes of Donald Friend’s diaries for the National Library of Australia, the last of which was shortlisted for a Manning Clark House National Cultural Award in 2006.

Creativity and its decline consume the collection. In a poem entitled ‘An Ageing Artist Reviews His Work’, a painter sets fire to two years of work; in ‘Artist’ – a poem that might, for its biographical correspondents, be about Friend – an irascible painter refines his style until he cannot write his name. In ‘London’, sculptures and paintings fill ‘every corner of seeing’ yet the speaker is gripped not by a celebration of form but a recognition of its lack: ‘We existed in a space that was skewed,’ he confesses, ‘disrupted, disowned, ill-conceived.’

The human form in its architectural glory is a frequent study in Six Different Windows. But just as frequently bodies find themselves at odds with the minds they house. In a love poem called ‘Holding’, a man grips a woman – her back arched, her head thrown back – as she falls away from him. ‘Time has no dimension’, he learns, beyond ‘the running steps of her rib cage’. In this unstructured moment, he has become ‘alien to himself’.

More than surfaces Hetherington’s poems prefer a view of the body’s interiors: ‘The blood was always there,’ a speaker observes in a poem that ruminates on childhood wounds and the mystery of girls’ menstruation. He considers his own body – ‘little more than a container / for the litres of blood’ – and marvels at ‘the body releasing itself / in a hundred ways – as if always / wanting to let go of itself’.

Yet form and body offer only one view into the collection. Hetherington wrote his doctoral dissertation on the poetry of Emily Dickinson, and his poems clearly stand in a tradition that upholds a poetry of mind. Hetherington’s poems are more sensual than Dickinson’s and make greater use of narrative, but the similarities extend beyond a passion for the em-dash. Both Dickinson and Hetherington are interested in the mental construct of ‘space’ more than the physical construct of ‘place’. And both take pleasure in a mind in disarray: the disjunctions of aporia provide the necessary kick to throw their poems into being.

For Hetherington, at least in his poems, the pleasures of aporia seem peculiarly female. While his male subjects are often alienated from their bodies and bemused by the loss of their generative powers, his female subjects are invigorated by emptiness, chaos, disobedience, and other improprieties. For them, the mind’s perceptions and processes are not to be controlled but played like a game: ‘Is the past like this,’ a speaker asks, ‘something to step into / like an antique dress-up?’

Hetherington’s women are usually found in transit. In the poem ‘Passport’, a gypsy on a train to Switzerland strips down to her ‘bra and colourful knickers’ in a moment of seeming madness. She remains silent and unperturbed by the passengers’ stares as guards wrap her in a blanket and escort her from the train. She has escaped, the speaker thinks admiringly, the ‘confined space called right behaviour / that we had entered and agreed to share’. In ‘Through A Window, Looking Back’, another woman watches the Italian countryside recede as her train speeds toward her lover. Her pleasure is not a simple sense of freedom from family and domestic routine, but a sensation of vertigo – ‘the stomach dropping into space / on a steep climb’ – that hits when she remembers:

how once they’d been at loggerheads
for two days, and on the third, had made love
and barely known each other
or themselves. She’d wanted to keep that –
the not-knowing, the animal life
that had risen. She had wanted
to stay strange to herself.

The collection concludes with a portrait of a woman – perhaps the one from the train – who, having hidden herself for too long in an inadequate marriage, has arrived at a villa in another country: ‘She’s in a room not far from where the sea / breaks across the rocks, loosening her blouse.’ Memories of her family dissolve into silence, and the absence of greeting delights her. The woman ‘handles her arms, strokes the skin / of her legs’ and ‘unpacks her heedlessness’.

Hetherington usually reserves this kind of reverie for female characters, with the exception, perhaps, of the beautiful poem ‘Dépaysement’, which pays homage, as the title suggests, to the generative powers of disorientation. Like many of the poems in Six Different Windows, it begins with a view of the world receding. But this time the speaker, it would seem, is male. The man is strolling down a street in Barcelona watching a church bell lurch on the horizon. A white dove batters a high pane of the old city’s cathedral. Inside, incense drifts like the snow until everything – the speaker’s body, the sky – is charged and ringing with the deepest of mysteries:

My body was tolled across time
as someone walked in my yard
tying back plants, puzzling at grace
under a clangorous sky.

‘Beginning is not only a kind of action’, Edward Said remarks in his celebrated book on the subject, ‘it is also a frame of mind, a kind of work, an attitude, a consciousness’. To be alert to a beginning is to be aware of departures and entrances: to be filled with the promise of what is to come. But to ask where a poem begins is to encounter a series of questions. Does a poem begin, thinking concretely, with its first line? Does its beginning proliferate with its peritexts: title, epigraph, dedication, subtitle? Does a poem begin the moment a body sits down to write it, or is there some other secret point at which the thought that impels the poem first came into being? 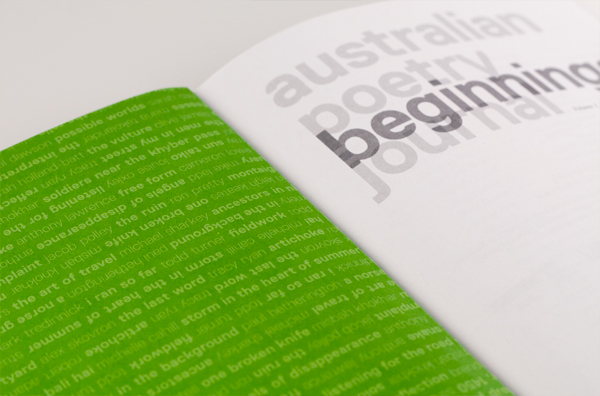 ‘Beginning is not only a kind of action’, Edward Said remarks in his celebrated book on the subject, ‘it is also a frame of mind, a kind of work, an attitude, a consciousness’. To be alert to a beginning is to be aware of departures and entrances: to be filled with the promise of what is to come. But to ask where a poem begins is to encounter a series of questions. Does a poem begin, thinking concretely, with its first line? Does its beginning proliferate with its peritexts: title, epigraph, dedication, subtitle? Does a poem begin the moment a body sits down to write it, or is there some other secret point at which the thought that impels the poem first came into being? Did Paul Hetherington’s poem, ‘A Norse Greenlander, 1450’, for instance, begin as he sat (I’m guessing) at his desk in Canberra, or did its authentic beginning manifest in the arctic circle some 500 years ago when a cold-weary woman sharpened her scythe and contemplated another frozen harvest.

Perhaps, to take an airier view, a poem does not truly begin until a human mind hits upon it and permits language to animate its neurons. The poem as a cognitive act depends on a host to arouse it from the dormancy it slips into between readings. But what then do the anarchic practices of reading – rarely do we read books and authors in chronological order – do to a poem’s antecedent beginnings? Some readers will, for example, encounter Pauline Reeve’s ‘After Akhmatova’ before reading the Russian poet who inspired it. Alex Skovron’s ‘The Attic’ enters truly uncanny territory with his idea of a translation predating the original: the unacknowledged translator in Skovron’s poem stores manuscripts in the dusty corridors of his attic, never to consult them until ‘the original, in its first language, appears / in some quarter of the city’.

Stranger still, it’s conceivable – to consider Christian Bök’s Xenotext experiment – that a poem will enact an alternate beginning beyond the human field. Using a ‘chemical alphabet’ Bök’s project is to translate his poetry into sequences of DNA he will implant into the genome of Deinococcus radiodurans, an extremophile bacterium so resilient it can live on the surface of the moon. The protein the cell produces in response will form a second comprehensible poem. This marriage of language and microbiology is not without precedent: in 2003 scientists inserted a DNA translation of ‘It’s a Small World’ into D radiodurans to demonstrate that the bacterium could be used to store information in the event of a nuclear catastrophe.

No poem, however much it might deviate or even mutate, can stand completely outside a tradition. Yet not all antecedents to a poem, it must be said, are necessarily born of literature: Brenda Saunder’s ekphrastic ‘Art of Travel’ begins inside the paintings of Manet and de Hooch; Margaret Bradstock’s ‘Bali Hai’ pays tribute to the late Margaret Olley; and Michael Sharkey grounds his ‘Ancestors’ poem in the staged grammar of nineteenth-century photographs.

The proposition that a poem’s meaning is to be found in its antecedents has long been a topic for debate in literary criticism. In ‘Questions to Answers’, Bonny Cassidy considers news books by Elizabeth Campbell, Ali Alizadeh, and Libby Hart in context of their earlier works. David McCooey, in ‘You Can’t Be Serious’, traces Ken Bolton and joanne burns’s present-day poetics to a beginning in the fight and footle of 1968. And in ‘Re-entering Bloomland’, Martin Duwell assesses Harold Bloom’s reassessment of his theory of influence in which so-called ‘strong poets’ attempt to make space for themselves by emulating and corrupting their poetic parentage.

But this is not to suppose we can do without the concept of a beginning. Moments of becoming, as moments of departure, are crucial to the construction of meaning in our lives – though at times the two might appear difficult to differentiate. As TS Eliot says in ‘Four Quartets’: ‘What we call the beginning is often the end / And to make an end is to make a beginning. / The end is where we start from’. ‘Beginnings’ seemed a natural topic for the inaugural issue of the Australian Poetry Journal. It enters a pre-existing world, but there is no question that it has arrived.